I guess I have to go back a bit to make this morning’s discovery make sense to anybody but me. I guess it’s an example of how viewing can muck about with your mind and how information on targets that have no feedback can spawn all kinds of stuff.

Years ago (around 1997 I think), I had a powerful dream. I was standing in a big valley with a bunch of people who were impossibly tall, and it seemed like some ancient time. In the dream I seemed merged with others, like I often am “of The Four”. I think it’s possible, I felt on awakening anyway, that the people were all of the species that the female of my four often presents in, the one with the long head that I interpret as the “pre-egyptian”.

We were all focused on this rather majestic and powerful creature. Huge. As “I” (meaning, my identity here) got a little bit lucid in the dream, and so a bit more independent-thinking, I realized that the creature was made of stone, and I thought, but how can he be alive?

They responded in a way that amounted to, If a creature of bone [such as you, or we] can be sentient, why not a creature of stone?

There was some overlay of an odd similarity between bone and stone that I didn’t fully get. But the point was that the creature was very much alive–I knew that, as I could feel it.

I gazed at it, so incredibly alone in this space somehow. Won’t it get lonely? I asked, feeling such a strong sense of its uniqueness in the world, and its powerful and sentient presence.

They responded in a way that amounted to, Yes, but we are creating for him a mate, and so, then they will not be alone.

When I woke up, I understood that the stone creature was the Sphinx in Egypt. It was just a no-brainer… I didn’t guess, I just knew.

When I told LJ about this way back then, he of the endless study of archeology, anthropology, science anomalies and so on, he said that was interesting, because he’d run across at least one legend of an alleged sphinx on the other side of the world facing the one we know, at some point in history (apparently not now).

Well, it’s a trivia, and that was that. It did give me a sort of ’empathy-sense’ for the sphinx, though. Every time I have seen a photo of it since that dream, I have felt such a sense of sadness, and a sense similar to that I feel every time I see a photo of the Mars moon Phobos: a sense of “damage to the face” somehow. (I’ve actually got that as data a couple times in sessions on Phobos.)

Some time ago (a few months maybe? I have no time sense) over at TKR’s space in the Dojo Psi, Marv Darley tasked people on what the Sphinx looked like originally. Unfortunately I missed that mission, which bummed me out, as I found that an interesting question. I thought maybe I’d have to task myself on that someday, but then I forgot about it.

(Later, update: I went to grab a screenshot of the TKR mission page of his task just for a little image here, and I can’t find it. Did he not do it? Did it disappear? Did I hallucinate this entire thing? I swear, sometimes my memory is so weird. It reminds me of when I was a kid and had a rather hard time figuring out whether things had happened or I had merely dreamed them happening.)

So a few weeks ago or so I was doing a session and for the third time I got an “icon” data. Now, this is something special I want to talk about on the firedocs blog, if I ever get photoshop of any version functioning bootleg on this computer. Suffice to say it is a really specific “feeling” when data comes through like this, and of the two I’d had previously, the icon amazingly, succinctly ‘summed up’ the shapes and somehow even their dynamic.

I wish I could put into words how this feels inside, not only the clarity of the shape, but the super sense of “sharp contrast clarity” of the edges of the shape, like the most high-resolution clear edges of an icon/logo you can imagine. I could only sketch them at the time of the sessions but I want to make what I actually saw-felt-etc. in session and then show it with the feedback so people can see what I mean.

Anyway, so in the session, I get this very clear flash of a hawk-head, like that Horus thing in Egyptology, and a real focus on this head in the sense, like it was important.

Then I get a graphic-icon data: A bird with outstretched wings so its real obvious, like a stylized Phoenix made with lots of these little shapes, all the same shapes, like one of those art things created by spraying paint into a cut-out-template, I’m having a mental block on the word right now. It actually reminded me vaguely of a pic not uncommon on the hoods of ‘firebird’ cars in the 1970s I think it was, but a little bit different, and I thought during the session, that’s probably why I’m getting it as icon-data, because in my mind this ties into a logo.

I sense there is something on the head, and wings. I didn’t get a body sense clearly in the session, and yet, I did have a sense I recorded of a larger solid-body creature that had wings, “like a griffin but not” was how it felt and I think that was the data in session. You know, big solid body, but wings, bird-head, like some super magical ancient creature.

But it’s got that’s graphic-icon feeling, which is really clear and strong, and I get SO EXCITED because so far, the other two times I had that, the data was just incredibly succinct with it and I’m thinking, that’s so fantastic! I can’t wait to see what the target might be! I bet whatever it is, this data is awesome for it.

I’m working from my envelope pool which was made like 8 years ago of around 800 targets, but now has about 500 left, including several bizarre off-the-top taskings that I’ve completely forgotten by now but sometimes stumble on (and usually think, “What the hell was I thinking when I tasked this?!”), but I can’t even think of what could possibly match something like this.

The target feedback turned out to be an old photo of the sphinx. 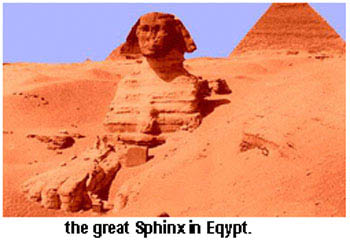 This wouldn’t be the first time I have wondered about something in a target (for example, how a crop circle was made) and then when I happened to get that target, actually described what I had previously wondered about — I think that this is like subconscious self-tasking in a way.

But I was so bummed on feedback, because I thought: it makes no sense. Why would I get a hawk’s-head for the sphinx? Surely it could never have had anything like that, whatever it might have had, surely it wasn’t that. After all, it has the body of a cat. Aren’t there somewhere, some feline bodies that have Rams’ heads or something? Probably that’s what it had. And where on earth would I get the idea of the wings, I wondered. Did that just go with the hawk-head symbol? It didn’t feel like it. I still had the griffin-like-but-not-that overlay.

Ya never know. Ya just move on.

Today I was wondering what to task for the TKR Mission. Still half asleep. Idly, I wished I could task the sphinx’s original look, based on my session, then realized I couldn’t as it’d likely be a tasking thoughtform since I already had something in my head. Then I remembered that Marv had already done that anyway. Doh.

But since I was sitting there, out of curiosity I typed into google — I was on the ‘images’ search at the time — hawk head feline wings griffin, or something like that. I didn’t actually expect to find that weird a combo, I just thought it might be interesting to see if there was anything that associated griffin with the hawk or feline concept mostly.

Google is becoming a metaphysical tool. 🙂

I glanced through the various horus pics idly, and suddenly — there was a creature in a drawing that had the head of a bird, with something on top of the head, wings, the body of a feline, and it appeared to be a ‘griffin-like’ creature. “Like a griffin, but not.”

I literally just sat here at my computer staring at it, completely speechless. Holy crap!

I had no idea such a thing existed. My skeptical mind says any info existing in the world I could have been subconsciously exposed to, ok fine, but consciously, I am certain I was not aware that this existed. I clicked on the picture to see what the page said.

AmericanMonsters had this to say about the creature in the picture:

Resembling the infinitely better known GRIFFIN, this animal was said to bear the head and wings of a hawk, both of which were blended into the muscular torso of a large feline.

Most depictions of this ancient animal – which like so many other potentially “real” creatures was included among the pantheon of Egypt’s minor deities – show three, curved appendages resting atop the Axex’s skull. Some researchers have concluded that these adornments bear more than a passing resemblance to the crest of a rooster. This animal has also been associated with the winged British scavanger known as the OPINICUS.

Never heard of it till now. It doesn’t seem possible the sphinx used to have wings, though how the hell would I know. It’s enough of a stretch trying to imagine it having a hawk’s head for goodness sake.

Now I am really interested to know more about Axex. When I get time I’ll see what I can find.

Update (later): I did a quick search on sphinx and I actually found a pic of a “Greek Sphinx” that has wings. Maybe that’s not so unusual as I thought.

(P.S.: I wasn’t quite as crazy as I thought. Marv had a different task, but in the TKR thread that discussed it, Eva was talking about the sphinx’s possible original face/head. That is where I got the association. This will teach me to try to do much of anything when I am sleep deprived!)

Entities. Psychic stuff. And other things even less respectable!

When we understand that perception is as much about source as target; that energy is a spectrum and best psi perception comes from the center, its balance and blend; that the manifest communication of our Selves is the literal 'reality' we experience; that everything in that reality is a profound 3D language element; that insight with the ‘center’ of spectrum is likely to be via the language-symbols of 'reality;' that these need to be interpreted at the level they are received; this is the path for intentional psi.
Insight on the Art of psi